Right on the Vermont/New Hampshire border is an odd little spot. In the middle of the woods, on a beautiful walking trail, the

ruins of a castle still remain. This is in West Chesterfield, New Hampshire and the building was Madame Sherri’s Castle. Madame Sherri was a Music Hall Singer in Paris in the early 1900’s she came to America with her husband (Also a performer in France) They arrived in New York City in 1911 and became famous costume designers (They worked on Broadway and with the Ziegfeld Follies). Andre and Antoinette were incredibly successful and popular in New York and they would go with their friends to party in New Hampshire…

Unfortunately, in 1927 Andre went blind then shortly after died. Some speculate that the toxic bath-tub-gin of the prohibition era killed him (read the excellent “The Poisoner’s Handbook: Murder and the Birth of Forensic Medicine in Jazz Age New York” for some pretty scary stories of how people were literally dying for a drink during The Prohibition)
Madame continued on and in 1931 she had her “castle built in the woods  of West Chesterfield. It was really more of French chateau in the NEw England woods. 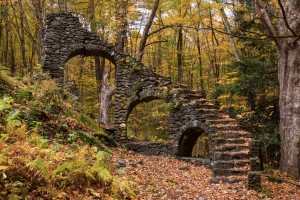 Madame was quite the infamous character in the West Chesterfield area and tales are told of her coming into town wearing nothing but an ankle length fur coat . Her parties and the people she invited to these parties were also fodder for the wagging

tongues. Stories of drunken midnight skinny dipping and other shocking debaucheries kept the locals well supplied with titillating gossip for many years. Madame spent the end of her life in a nursing home in Brattleboro Vermont. (Sadly, he was quite penniless and ended up as a ward of the state). On October 20, 1962 (Some reports say the 18th) the castle was burnt to the ground. It had remained a party location just of a caliber of party (think less champagne and more Sterno) and the place 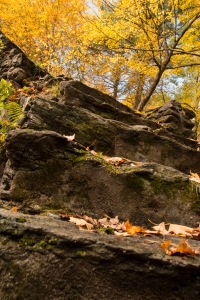 had fallen into ruin before the fire.

Then on Oct. 21, 1965 Madame Sherri died at Maple Rest Home in West Brattleboro. Only six people attended her funeral. The woman who had kept tongues wagging and glasses full died alone and

penniless and I’ll admit that breaks my heart. Even today she has provided for the people of the area with entertainment. Oh she can no longer show up in town in her chauffeur driven custom made cream colored Packard with exotic animals and even more exotic people. The town’s people can’t whisper about maybe Madame is really a madam and many other wild stories. No, today the ruins of the castle serve as a backdrop for photographers (I have only been there twice and I have seen 3 photo shoots focused on the grand staircase.)

I plan on going back to the area sometime soon but next time I think I’ll be finding Madame’s grave site and be leaving a tribute and perhaps a splash (or two) of gin!

One response to “Madame Sherri’s Castle”

What we’ve been talking about